Menu
Croeso nol! Welcome back! Every child has the right to an education. Mae gan pob plentyn yr hawl I addysg. ROM #28

Art by staff of The Bridge

Welcome to The Bridge Gallery, share our photos and enjoy Bridge life!

*Many of our pupils are not comfortable with their photographs being taken and our gallery reflects this.

Small gifts from KS4 for young people at Llamau 🎄

Visit from the Children and Young Peoples’ Committee of the Senydd

The right to be heard and taken seriously!

The group from 4 Bridgend Schools including us!
The Headteacher's Office
Mrs Morriss teaching, classes are much bigger.
Planting trees as we did in school here!
Welshcakes get everywhere!
An outdoor class!
Not everyone has a desk but is keen to learn!
The school kitchen.
The outdoor learning experience.
Happy to be in school :)
Day off visit to the Equator 0 degrees!
This cereal bar made it to Uganda!
Celebration time...
The dragon gets everywhere.
Planting mango trees :)
The presentation of the commemorative plaque.
Teachers take their children to school.
Souvenir ukeleles!

“Supporting your child with anxiety“ workshop for parents today!

Primary Reading Cafe story board fun with parents and carers 📚

Mr Rees was our very own zoo keeper!

We raised £115 from our Macmillan Coffee Morning, wow!

NEW! Spill free lidded cups for all staff to keep everyone safe.

Taith and Gobaith classes visit Heronsbridge School to volunteer with their students.

Y11 Leavers’ Celebration - the right to learn and go to school (article 28).

KS3 and the right to good food and water - from our own beds!

KS3 hard at work on their 🐝 hotel in Forest School 🌳

He's a Staffy, so of course, that comes with all the stereotypes that come with this hyperactive breed. Firstly, he's...well, hyperactive; when visitors come to the house we have to keep our distance to stop him from hurting someone, with his big, stupid grin and dangerously long claws. Those things are so long I really can't count how many times he's made my arm or leg bleed with the stray, clumsily placed paw. He's a serious potential hazard not only to us but to himself too. He picks fights with dogs he really can't fight and too often comes home from a walk staring innocently at everyone, panicking about the fresh, bloody cuts along his snout.

I love dogs, but this source of relentless energy is sometimes a bit too much.

So, rewind to a couple of years ago, maybe. It's my turn to walk the dog, on a scorchingly hot summer day, after a mentally exhausting day at school and I just really wanted to go to bed. Living next to a field, it was easy work; I could keep him (read: the demon called the dog) under control until we got to the sea of grass and once we got there, I could release him into the unknown and just relax and let myself recuperate from the day.

Simple. Easy. Nothing to it. Until I recognised the faint humming of a tractor the moment I unclasped the lead from his collar.

I'd like to say that the rest was in slow motion and my heroic nature drove me to reach out to stop him from bombing down the field, yelling in despair as he slides just out of my grasp. Honestly, though? Who has the energy to do that on such a terrible day? Within a blink he was gone and yeah, I was panicking pretty badly. At this point, the sweat rolling down in bulbous beads along my forehead wasn't only from the twenty-something summer temperature, I was starting to go faint from thinking of all the ways my parents would scold me when I got home.

So, I tentatively called out to the near endless stretch of yellowed grass and wheat, wishfully thinking that he'd just come back to me, let me re-hook the chain to his collar and be on my way. No response. Other than the constant drone of the tractor hammering into my skull in the background. God, was I in trouble.

And so, with this nihilistic knowledge in my head, I began the trek through the expanse of about to be harvested crops, calling aimlessly every now and again. Occasionally I could see him poking his head up through growth that's about twice his size before he vanished again, leaving me with only the faintest idea of where he could have gone. I didn't know what I was doing and didn't have my phone on me to call someone for help (despite being able to see the house from where I stood). All I could do was panic, call and panic some more, before my breath practically stopped and my knees almost gave way to what I saw.

The absolute spoon, standing on the mound of dirt that separated this side of the field to the one that held the roaming tractor, staring at me with his wide, panting mouth, almost twisted in a taunting smile. Just then, all the panic was almost instantly replaced by anger.

I called his name, I whistled, I clicked my fingers - anything to get him to move. Treats, food, sit. Before I knew it, keywords that didn't even make sense were tumbling out of my mouth and I didn't even feel the tears that were dripping down my cheeks. And all the while, he just stared at me. Smiling.

With one last stretch, I called his name again. My chest swelled, my eyes twitched and I let out a bellowing shout that echoed amongst the surrounding trees. I felt almost proud of myself. Almost. Until I realised the only triggered him to bound further towards the tractor ahead...

World Book Day celebrations for everyone!

Thankyou for all your work Ms Lawrence :)
The Maths Teacher in the Striped Pyjamas...
Matilda yn Gymraeg, da iawn!
Cat in the Hat chats with Matilda (in English!)
Mr Kingscott is a famous dead poet....who?!
Two Wednesday Addams for the price of one!
Harry Potter is now a teacher in The Bridge?!
Books for everyone... thanks for the donations.
Mr Spencer will always be Six Dinner Sid :)
Another beautiful Matilda!
This cat is busy...she's found a friend in Tigger!
Key Stage 2 had a great time:)
Hermione Grainger is back to boss us all about!
Howdee Pardner!
Cruella De Ville seems to have joined Y11...
Books galore!!
Dangerous wizard indeed!
Dreams...
We popped to the Forbidden Forest for unicorns!
Hi Harry :)
A princess and a witch pose it up!
Not you again Harry!
The Hunger Games and Mr Rees
Have you seen this dangerous pair??
Or this wanted wizard??
I think the owl would eat the cat you know...
Ah! Story time at last...
Fantastic Mr Fox "is there room on the broom?"
Frieda Khalo rocks the monobrow!
Ooooooompa Looooompa!
Fantastic Mr Fox looks dapper!

The KS3 memorable experience for the topic of "pits and ponies" was Rhondda Heritage Park.

Most of our intrepid adventurers!
The last dram of coal in 1986, 33 years ago!
Teilo is ready!
We will display some of our sketches later.
Miss Miles off to work!
Mr Kingscott give a hands on demo...
I think Mrs D and Miss M found the coffee shop :)
Nikki Lee hard at work!
Into the darkness.

Decorating our tree at B-Leaf Bryngarw Park - treetastic- Including some of our most important rights! 🎄🎄🎄🎄🎄🎄🎄🎄🎄🎄🎄🎄🎄 🎄

Our visit to "we the curious" in Bristol for our "bloodheart" topic - respiration, combustion, circulation!

Stars in our Schools celebration

KS2 finding geographical features in the atlas and programming the bot to mark them on the map!

Before!
Off we go, carving and using tools safely
Its a cyclops!
A pumpkin crew of scary faces!

KS2 have been busy this week!

Positive parrot says "never give up"
Jenga Cymraeg!
Following instructions to make our own playdough
Lots of colour!

The world's biggest coffee morning for Macmillan Cancer research - we raised over £70!

Thanks to all parents and pupils who called in!
And thanks to those who baked mmm....
And those who tucked in!
Mrs Cox-Wall never eats cake, its just a plate!
Thanks Jan for the fat free sponge!
Tiny twin visitors!
Thankyou Mrs Morriss for your organisation!
Ms Bowen, Ms Lang, Mrs Thomas, Ella and Eve!

Pink Bay beach clean up with the Marine Conservation Society, we collected over 4kg of mainly plastic rubbish! #ethicalandinformedcitizens

Good times on our end of term reward trip to Oakwood Park!

There's always weeding to be done!

Taran hard at work!
Miss Lang, Ms Sage and Georgia get stuck in!

An electrifying quiz designed and built by Cavan KS2, it lights up when you get the question right...

How much have these grown!

Our new KS2 play equipment is finally in!

Investors in Families bedtime stories with KS2 parents and carers

2 of the star bakers - Ella and Evie
Set up to sell, lots of hungry takers!
Fab brownies baked by Georgia

Staff from The Bridge, Dylan and Sally Holland
Our workshop activities about rights and barriers

KS4 Pupils with PC Beaumont on the dangers of substance misuse

Coity's "growing payns"
I spy arrow slits
Don't fall in the well!
The ruined tower
and the ruined wall
A window or a doorway?

KS3 building Legomindstorm Robots from Technocamps. Check out the videos page to see its' smooth moves!

A Taste of Christmas Craft Sale

We marked Armistice Day on Friday in The Bridge with a minute's silence and a special assembly.

Ensuring our learners understand the meaning.
KS3 made special biscuits to mark Armistice Day..
Poppies #lest we forget...

Our Snowdog Tails In Wales visit to sunny Cardiff Bay!

KS4 sold bacon sandwiches for £1 at break today to raise the sponsorship for our Christmas Shoe Boxes #tasty!

Wear it Pink day! We raised over £50 with cakes and donations, da iawn diolch!

Busy packing shoe boxes for the Shoe Box Appeal, its not too late to send anything in!

We enjoyed a tasty coffee morning for Macmillan Cancer. We had cake, home made and errrr....shop bought, coffee, tea and lots of conversation! We'll let you know how much we raised. Update! We raised £104, amazing! 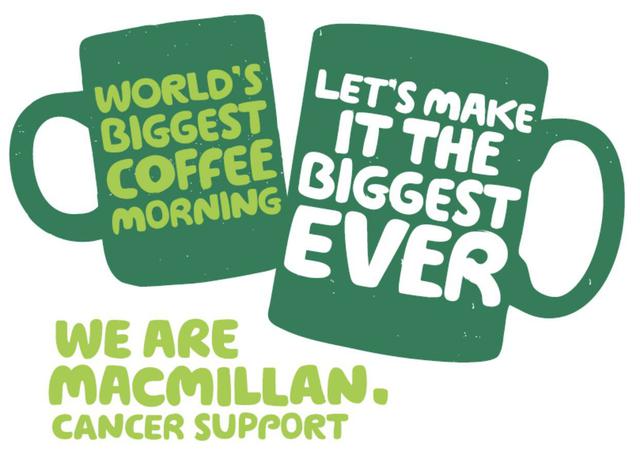 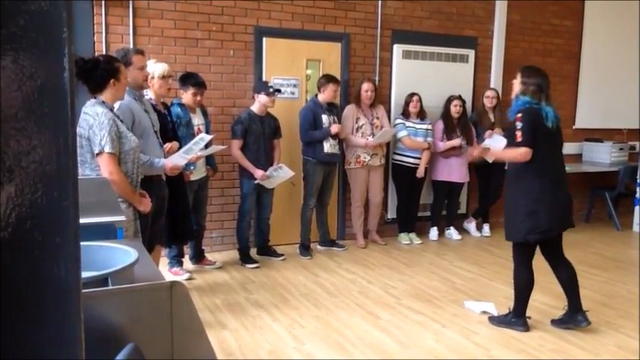 KS3 and 4 pupils from our anxious non attenders and mental health provision sing and play the ukulele at the Y11 Leavers Ceremony, led by our Drama Practitioner Izzy Rabey. The website will only let us upload a tiny snippet but great achievement everyone, you did yourselves proud!

Children's Rights at The Bridge - Welsh Government policy in action.